The Maple Leaf Times (MLT) blog features 4 articles per issue of the Maple Leaf Times magazine. To receive your MLT magazine in print (8 issues per year) with many more articles, become a member of the Canadian Association of Singapore -- http://www.canadians.org.sg/membershipSign.htm 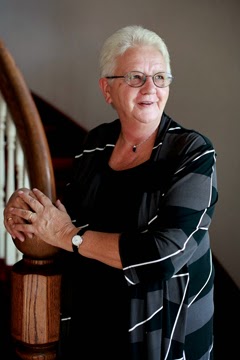 As Tabitha Foundation marks an incredible 20 years helping poverty-stricken Cambodians, we talked to Tabitha’s nspirational founder, Canadian Janne Ritskes about how far she has come from the early days of dodging bullets in war-torn Phnom Penh and about her most ambitious project to date - Cambodia’s first ever women’s hospital, Nokor Tep.

Since Tabitha Cambodia was founded in 1994 (it now has supporting Foundations in over 8 countries including Singapore), it has earned a reputation for professionalism and sustainability. Six programs – savings, wells, housebuilding, cottage industry, schools, and now the planned Nokor Tep Women’s Hospital, provide long-term solutions to poverty.

The statistics are of Biblical proportions.  3 million Cambodians raised from poverty to self-sufficiency.  8,000 houses built by 15,000 volunteers. In 2013 alone, 25,000 families moved to middle-class income.

Much of Tabitha’s success so far is credited to Janne’s vision, warmth and downright tenacity. Born and raised in Canada, Janne has lived in Phnom Penh for two decades and has an adopted daughter Miriam, whom she calls ‘the greatest gift of all’ and who, as HIV positive, she says has taught ‘all of us that just because someone has an illness, that is not the whole person’.

Talking to Janne shows that Cambodia is a very different place to the shell-shocked country of 1994.  She told us what life was like when Tabitha began.

‘Our first office, my goodness, when it rained it flooded.  Toilets overflowed.  I slept in one of the office rooms and every night there was gunfire and grenade blasts.’

The Family Savings program is the cornerstone of Tabitha.  Every week each family saves a pre-agreed amount, maybe as little as 25c, and after 10 weeks uses the money saved to buy a pre-determined item, such as a cooking pot, or a blanket.  The saving cycle continues, and after 5-7 years the family will ‘graduate’ from the program with a steady source of income, a sturdy permanent house and all of their children in school.

The housebuilding program is one of the most successful run by the Foundation, often with unexpected benefits for the volunteers.

“I remember our very first housebuilding team, a group of young students with behavioural problems.  My challenge was to give them a different role.  James, a troubled teen, expelled from three schools, was team leader.  After house building, James wrote to all three schools and apologized for his behaviour.  He asked for forgiveness and a second chance.  All three schools gave him that chance.  James did this without his friends or parents knowing”.

Janne has had her share of personal sadness.  She was not able to be at her mother’s side to say goodbye when she passed away, because she was in Cambodia with the people to whom she has devoted so much of her life. True to her nature though, she has turned her personal struggles into opportunities for good.

“The day I was diagnosed with breast cancer, within an hour, all was set for treatment.  If I was an ordinary Cambodian woman, this would be a painful death sentence.  Building Nokor Tep Women’s Hospital has become our current project.  It is good and right, but like all facets of our work it involves struggles, struggles that make us strong.”

Janne was successfully treated.  And now in Tabitha’s 20th year the pace of her work has far from slowed down but quickened with this milestone initiative.  It is her vision with co-founders Her Excellency Dr. Ing Kantha Phavi, Cambodian Minister for Women’s Affairs and His Excellency Mr Trac Thai Sieng, Vice Governor of Phnom Penh.

“No woman in Cambodia will be denied treatment because of inability to pay the basic fees.  The project and costs are immense, but building is well underway.  We still have a long way to go and $835,000 is needed for the next phase.  The hospital will also provide mobile outreach clinics to reach out to communities throughout the country.”

Find out more about how you can help the Tabitha Foundation Singapore at www.tabithasingapore.com and the Nokor Tep Foundation at www.nokortep.com